Hola. This week the PGA sips margaritas at home while the top players in the world head south of the border for the World Golf Classic and a chance to win the coveted magic Genie in a Bottle Sarazen Cup. Last year was the first year the WGC pulled the tournament from Golfer-In-Chief’s Trump National Doral and moved it to Club De Chapultepec in Mexico City. Dustin Johnson held off Tommy Fleetwood, Ross Fisher, and Jon Rahm to win his fifth WGC event, second only to Tiger.

This week also brings back a much-welcomed NBC to rescue us from college basketball induced delays and Jim Nantz inviting people into the golf booth. Mike Tirico is fleeing South Korea and coming back west to join Johnny Miller, Feherty, and the rest of the crew to cover the tournament.

The tee times this week don’t start until 11:15 Central time, which forces us to find something to do for the first half of the day on Thursday and Friday. The high school textbook diverse grouping of Jhonattan Vegas, Kevin Kisner, and Matthew Fitzpatrick start off as the first group off the back 9 while the lone Mexican, Abraham Ancer, starts things off on the front nine with Peter Uihlein and Yuta Ikeda.

DJ, Jon Rahm and the leading voice for the sport, Justin Thomas tee off the back nine at 11:51. While JT didn’t toss any fans out last year in Mexico, he did toss his club into the fans, eliciting another classic JT Twitter apology.

Sergio, Tommy Fleetwood, and Alex Noren follow them while Justin’s Rose and Spieth along with Rickie Fowler tee off later on at 12:51. Also in the field is one of my favorite PGA Tour profile pictures, Brandon Stone.

For some reason the course allowed for several chip-in’s last year, most notably JT’s one-hopper and Spieth’s curler. I have no idea what that means or if we will see more this week, but it was entertaining as hell. Let’s hope for more of those. If the long guys can keep it in the fairway, look for someone in the DJ, JT, Rahm group to walk away with the win.

The experts like Tommy Fleetwood and Justin Rose this week. I’m sure Tommy Fleetwood is going to win a lot of tournaments eventually on our lovely continent, but until he does I’m not buying into him. The sleeper pick I’ve seen is Dylan Frittelli, who to be frankly honest, I have never heard of. Experts love to pick imports for the WGC tournaments especially for courses that aren’t on the PGA circuit, but I think the winner this week will be an American. My picks are Dustin Johnson and Phil. For the one-and-done I’m burning DJ because this is a big money week and I think he’s annoyed with all the JT talk from last week. Since there aren’t a lot of sleeper picks in the field, my dark horse is Patton Kizzire. He may have carded a +12 through two days last week, he looked great doing it. I think he bounces back and is focused for his first WGC event. 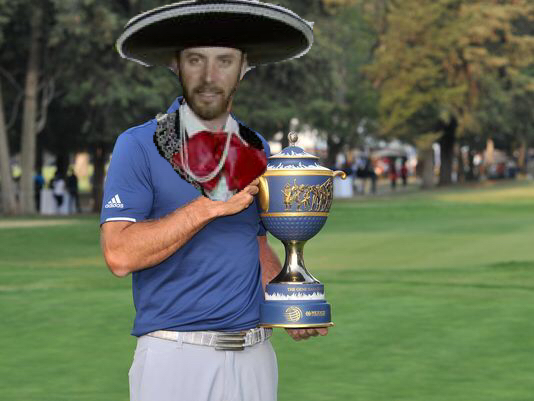 One thought on “WGC – Mexico Preview”